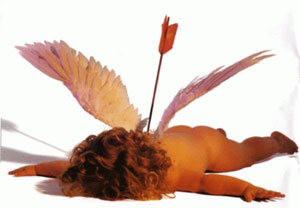 It's that time of year again. Rolls around quicker every year. Equally as bad as Christmas if you ask me, on your doorstep just after you've only just put that wretched tree back in the box!!

Before you know it, there's love hearts and 'I love you' cards everywhere - TV ads, spam emails on 'how to romance your lover', and endless chatter about the romantic things people want to go off and do to celebrate V-Day this year all over facebook and forums...

Ironically, I don't even care about red roses, heart-shaped chocolates or teddy bears - I could go and pick those up at Coles any day of the week if I wanted them...  No, it's the gestures, the feelings, the emotions, the heart behind them that I'm lacking - not the commercial crap!

Unfortunately, this barrage of 'reminders' of something I don't have in my life just hits in a really saturated way, this one time of year - and right on cue, the onslaught of emotions and hurts has sprung right to the surface because of it.  Oh yeah, bring on another day of feeling worthless, unnecessary, unwanted and ofcourse, unloved - just because of a commercialised holiday...  great.  Just awesome.

It was one little comment on Friday that has been rumbling through my head since, that started the decline....  being asked if I had a "significant other" - ofcourse, I had to say no (it's the truth after all).   I always follow it with a laugh and a joking "oh, but I have my cat!" - which doesn't actually dull the hurt that goes with it, but hopefully hides it from being written all over my face...  (*maybe if I laugh first, I'm less likely to cry?!*)  The follow-up question is always a stinger though:  ".... but why not?!".

I really have no clue why not...

I've always put it down to my size - when you're as big as I was, then ofcourse you're "unacceptable"....  after all, that's how I've always been treated and grew up believing.   BUT frankly, it isn't always the correct answer when you realise just how many larger people out there these days DO have a significant other...

But then, if not because of my size, then it must be ME whose not wanted... ?  Particularly now that I'm not the size I used to be...  There's something wrong with ME...??

I honestly thought that if I dropped the weight, that somehow all of 'this stuff' would just happen - that it would magically just turn normal ("just like everyone else"), and I wouldn't feel like the freak of nature anymore?!   .... but I'm so wrong...  and I'm gutted.

I would desperately love to say that I believe in the whole theory that there's "someone out there for everyone"  - but I'm plagued by so much doubt, I really don't know anymore...  I watch other people (always watching...) who just seem to 'connect' with someone - it just happens, like it's natural and supposed to happen... and even if it all goes sour, it doesn't seem to take them long to find someone new?!   OR there's those that have this intense doubt themselves, but their other half STILL breaks through, and fights against their fears, and they still manage to connect?!    I'm so envious of that....

It's embarrassing being 31 and still single, and not having the history that everyone in this age bracket seems to have.  It sucks when someone comments 'But aren't you worried?!'  (and yes, I've copped that too).  It stings like a bitch on special occasions when you're invited to go to something with a partner, who doesn't exist, so you just don't...   It sucks having to be "happy" for friends and their partners with their special news, announcements, weddings, births, travel, houses, life (anything really!) when you don't even see any of that in your own future...    It just hurts... every. single. day.

Normal "small doses" of all that I've learnt to deal with...  but this time of year, good old V-Day just rubs it in even harder, with a freaking steel-capped boot, just for good measure.

Talking through this with a gorgeous online friend today, made me realise that it's still one of the most extreme hurts that I have (albeit in secret) - and as upsetting as it is and embarassing to admit to - it's extremely significant.  She suggested I blog about it - and whilst I'm not so comfortable making this one public - it's one of the biggest pressing factors in why I instigated changing my life in the first place.   .. and why I need to keep going.

Have always believed I was destined to be alone.   I call this "my punishment" for giving up on my life years ago - and I wonder if this is what I now have to wear.   ... but I really hope not... I really don't want to be alone anymore.

I WANT to have a life, a future, a 'significant other' who thinks the world of me, who doesn't mind me gushing over them with all the unrestrained joy of having them there to do that!   I want someone to share my achievements and success with - that's what hurts the most now - for everything that's changed and all the good things that I've created through that change.... I desperately wish there was someone here to share that with, it would just make it even more amazing....

SO, I'll go and cry over some commercialised junk for a little while again...  it's tradition after all!   ... but then I'll suck it up and get on with it tomorrow.  On V-Day, I'll put on the brave smile that I always put on...  but instead of throwing myself a pity-party this year, I'm going to celebrate the pain instead.   I WANT a future with someone in it...  that's a huge step forward for a girl like me!  ...the pain in my heart just proves it.   Hurts yes, but makes it real.

... and I will try and 'believe' that there's someone really special out there for me too (as much as I doubt it, my friends are right - you have to believe first before it'll come true...).

And the big one - I must learn to love myself before I expect someone else to love me...  This may be the hardest challenge of all...  and probably the biggest barrier of everything I've had to face.  I don't have an answer or strategy for this one yet...

If I can do that, then maybe next year, or the year after that...  one day...  I'll get to celebrate my 'significant other' on Valentine's Day too....

** Not written for attention or sympathy...  just insight into the other side of my life.  Not everything is super 'happy' and celebratory for me - there's alot of hurts and emotions that go with the territory.  It's days and feelings like this that actually make the goals and wins even more significant and heartfelt.  It's all inter-related in the end.