So despite being the private girl that I am, I've decided that I actually DO have alot to say - albeit straight from the fingertips to the screen - and have initiated this Blog to keep me in check for the year ahead!

I've been on the mission of my life... literally.  Sitting at nearly 190kgs at my absolute heaviest just three years ago (Jan 2008) with no will to live or self-respect left, I somehow found it in me to give it one more shot to change - to find something (anything) that would break the downward spiral I seemed destined for, and let me breathe again...

So much has changed in the three years following that sometimes I forget that it's ME whose taken back the control and changed the direction of my future entirely.

It's not enough to go about my challenges on a day to day basis anymore (which it very much used to be - all I could do was one day at a time, one foot in front of the other) - now it's time to self-acknowledge what it is I've done, and gear myself up for the final phase of the mission - and all the crazy changes that lie thereafter!

I started off the year with a 'recap' (below) that I posted on the weightloss forums that I'm part of (the tool that's supported me the way through this mission of mine) - to help me focus on my next set of goals, and somehow push it into my head just what I've overcome in a year (the previous two years were equally as powerful) - and in the process, it's given me the courage to bring this a little more public - as I've always been too ashamed to talk about my weight issues so 'publicly' outside of a dedicated (and safe) weightloss arena - and dispel some of the fear I've held onto for far too long. In doing that, it helps me continue to forge ahead, but may also give someone else the courage to face their own weightloss and life demons (which are still raw in my own head).

So, welcome to Aim to Change!  Here's to yet another amazing year of changes, and all the benefits and possibilities that lie beyond!  No hiding anymore... let's see what the universe has in store for me this year!!

2010 has been a really trying year for me, but I thought I’d note down a bit of a ‘recap’ for myself, so I could acknowledge the things I HAVE achieved throughout it - then realised it was actually quite a victorious year after all!

There's lots of us out there that forget what we've done over the course of the year, or what obstacles we've actually overcome... sometimes taking a moment to reflect and acknowledge can actually be the catalyst for more motivation!  It's certainly reignited my drive to make this coming year equally as productive - so thought I'd share it with you, for those that need a bit of insight into their own!

In total, off came another 22.1 kilos, bringing me to a closing total of 77kilos lost over the last three years, equalling 40% of my original bodyweight GONE!  NEVER thought in my wildest dreams I’d ever be able to report having lost the weight of the average female!!

I’m also celebrating 156 weeks of NO junky fast food takeaway at the close of my third year, and something I’m not at all interested in breaking anytime soon!   Even with the lack of structure with my last few weeks in Sydney with dad in hospital, and the takeaways being an ‘easy option’, I’d still find something more beneficial than a hit of Maccas or a side of KFC…!

2010 has also been a really big year of change for me.  It’s taken a LONG time for me to be comfortable in my own skin, enough to brave ‘public’ exercise – but 2010 proved to be a big year for pushing those boundaries even further.  Walking in public in a singlet top – baring my arms to the world for the first time since I was a kid – HUGE moment of transition!  That’s now just part and parcel of my routine – singlet top exercise wear – and just last week, I bought a stack of new bright pink and blue ones in a size 16!!   (never did colour before neither… always black – the “hiding colour”). My normal clothes are now a size 16 top (with colour!) and a size 18-20 skirt (though, I'm finding that too big now too...!).  Yes, the body is out of proportion, but I couldn't care less - I'm still transitioning!!


2010 I discovered ZUMBA – where I bounce and jiggle and carry on with all the other crazy flailing arms and legs – and I’m totally hooked! NEVER been brave enough for a group class before in my life – always far too ashamed of my size – but it’s become such a joy to do, I’m kicking myself I didn’t do it sooner!!

I’ve also started running in public – RUNNING!  Well, it’s probably more of a slow paced waddly jog at the moment, but it’s something I’m working on!  The knees and I have come to an understanding that I’ll be doing these things irrespective of whether they like it or not, so if they play nice, I play nice too!!   Here’s to picking up the pace and going harder, faster and stronger in the near future!

This year also gave me a huge jolt to the health of my system – literally.  I went through a ‘toxic’ phase – which my naturopath put down to my extensive weight loss and the burden of toxins released from the fat cells.  (*may or may not be super accurate, so don’t take it as gospel or medicated advice!!).  My body was suffering major fatigue, dramatic hair loss, crazy dizzy spells and just an overall feeling of decline…    The hairloss and my increasing vanity sparked action on this one – and after working closely with my Naturopath, worked at overcoming these yucky health issues over the course of a few weeks.   Then I hit ANOTHER dreaded plateau….   (the third in three years)

I don’t have it documented, but all up I think I lost about 5 months from when my weird health issues started right through to about mid November when I seemed to have broken the up and down yo-yo of Plateau-land.  The final 3 months of that, I’d worked really hard with my Naturopath on all manner of things to break the bloody thing – but my plateau was proving to be as stubborn as me!!!!   Eventually had a breakthrough and a few consistent losses thereafter, and was really pleased to see my body and I were back on the same page again!

THEN December hit – and it was off to Sydney with my dad for his neurosurgery  (another hospital stint this year, has been a huge 12 months for him and a lot of stress for us…)  - and all the rigid structure of my previous few months of plateau-busting went right out the window….   I thought all my healthy eating and dedicated fitness routines might as well have counted for nothing - but ohhhh how wrong I was!!!   That structure has kept me pretty much on par - despite the blowouts over Christmas and not having access to better food choices all the time - opting for sporadic innovative exercise sessions when I could (like taking the stairs at the hospital, doing laps of the oval nearby, utilising the kids playground at the nearby school!)...  the small gain I clocked in this morning has got NOTHING on a month's worth of crazy - and I gratefully acknowledge my awesome established behaviours for that!!!

HOWEVER, the story doesn’t totally unravel at the end…!!!


A couple of weeks ago, in the thick of my hospital stay with dad, a gorgeous friend of mine whisked me off on the adventure of my life – an unexpected trip to Port Stephens for a few days before Christmas.   Broke through A LOT of my demons this few days – produced a whirlwind of changes for me!


I went for a massive beach walk, kayaking, tobogganing, snorkelling and swimming in the ocean  - all these amazing PHYSICAL things I’d have NEVER done in my life ‘before’ my weightloss…  and all took me very much by surprise that I was capable of doing them!   (once I got over the initial fear..!!)

Added to that was the attention from this male friend of mine (who seemed to have no issue with my size or my warped body!) – which was a total shock to the system and totally unexpected…  and I seem to have walked away from this a totally different person.   Maybe living in this body isn't such a bad thing after all?!!!

Was one of the most profound moments of my life – a huge transition year that was capped off with things that showed me I AM capable and deserving of all these awesome changes – and by god, I LOVE LOVE LOVE this person that I’m growing (yet shrinking) into!

SO having noted down all these amazing changes in 2010 – I’m starting 2011 in a VERY good mindset, ready to tackle the final phases of my mission.

Aiming for a solid 15 kilos loss by mid this year – and then I’m heading into the final chapter thereafter…   Looking at upping all my activities, joining a gym/getting a PT to really rev it up - and getting brutal on the food front.  I've always been pretty flexy with this whole thing - but this year, it's time to unleash the beast..!   Scary prospect, but I’ve overcome all my other hurdles this far, I’m armed and dangerous for whatever wants to get in my way now!

Before and current progress shots - just so you can see what it is I've been doing for the past three years!! 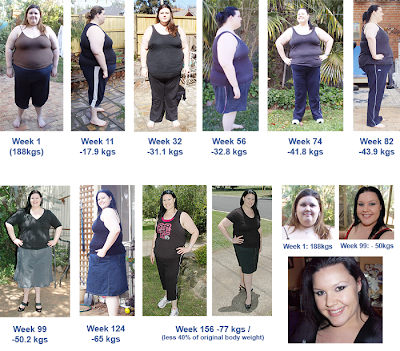 Email ThisBlogThis!Share to TwitterShare to FacebookShare to Pinterest
Labels: Aim To Change, weightloss