I had such an overwhelming response from the last blog entry that I just wanted to say a big THANK YOU to all the gorgeous people who offered such beautiful sentiments and support!  I'm truly humbled, and very grateful for all the posted messages and emails I've received - it means a great deal to know people care so much out there, and hearing it had an impact on helping others look at some of their own issues that are holding them back - that's just incredible and exactly what I wanted!

SO, I thought I'd bring the tone of the blog up a little today and introduce you to my fabulous TEAM!  For the last three years, I've been working on this weightloss business pretty secretively (aside from the forums) - shame and fear driving that one - but there's been a TEAM right here with me the entire way, keeping me on track, and making me no end of sweaty!!!  I'm so proud of them, I really want you to meet them!!   :)

Initially, I was too ashamed to be seen in public moving this body - so I hid in the backyard!  I invested in a few keys pieces of equipment, namely an exercise bike - which became my BFF for the first year of my mission!  I have really bad knees - to the point where I can't bend them properly least of all kneel on them - and the bike was a fabulous way for me to take the pressure off those joints, let the bike bear some of the excess weight while I huffed and puffed, and meant I could jump on at any time of the day without fear of being seen!

It's taken pride of place in both my backyard and then my back studio (in winter, perched in front of a TV & DVD player) and many kilometres and hours later, it's definitely been one of my ultimate tools!  She's semi-retired at the moment, now that I'm fitter and more agile - but never too far away when I want to mix it up a little!  She currently lives next to my weights machine (I LOVE weights!) and my bouncey swiss ball - all of which are just bystanders at the moment as I've taken preference elsewhere...

Despite having mastered the art of walking at an early age (haha), it took me a good while before I was brave enough to start walking in public.  When I first started on my mission, I was so big that walking just a few steps would bring on instantaneous sweating, puffing and much embarrassment... so doing that publicly was a huge NO-NO in my head!  The first attempt at walking in public was a complete disaster - under the cover of darkness...  It was just to try and make it around the block, but I think I was so anxious about the whole thing, when a car came past, I turned around and went home as fast as my chubby legs would take me - barely made it to the end of the road before my fear and tears caught up with me!  Definitely NOT the start to public exercise I was looking for!   I ended up with a treadmill, so I could hit the kms in the privacy (and comfort) of home. She's also semi-retired at the moment, hidden in my back room out of the elements....  Many kms later, and in need of a dire service - she's one for the cold Bathurst winters when I need to train indoors!   Definitely one of my favs, and never too far off the agenda!   She's been replaced with regular walks around the river near my house instead - yes, outdoor walks with sunshine, bugs, air and PEOPLE!!   I've slowly built up my half a block to being able to hit a triple-lap of my river circuit - averaging 9.5kms a hit!  I'll be looking at a fourth lap in the near future, just to keep my thighs guessing, haha!

Then there's THE DEVIL!!  My cross trainer - and one piece of equipment I'm absolutely LOVING stupid!!!  I've had it for about 6 months now, and it manages to kick my bum on every session!   Tonight it was a grueling hour (21kms) - but in the beginning, I could barely muster five minutes without thinking my legs were about to fall off and my heart and lungs collapse in a fit of extreme aggravation!!!  This baby is my pride and joy (aside from my business and cat!), and sits right in the middle of my covered pergola, pride of place!

After my month away in Sydney during December, coming home to this monster was pure agonising joy!!   First session, I could barely muster 10 minutes, but these muscles of mine were just screaming for the challenge, and we've been butting heads (or legs!) ever since!  Love the burn, love the sweat and LOVE the challenge that this gorgeous piece of equipment brings out! 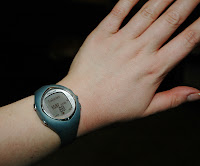 Other members of my TEAM include:

- My trusty heart rate monitor - it's like my "must have" dictator trainer who pushes me no end!  Makes me push harder when I want to see those "cals burnt" reading something worthwhile - and yes! Nearly 1700cals burnt on The Devil today, woohoo!

- My Adidas runners - fourth generation now, and RED (so they go faster, haha!) - comfy shoes are a must have!!   Fail to fit your feet out correctly, and you end up with more issues than it's worth!  Having worked in a footwear store and seeing the hideous feet of people not wearing correctly fitted shoes, it's scarred me for life!  Do yourself the huge favour of having your feet fitted correctly, in a shoe that accommodates your activities - and avoid fatigue, injuries and pain. SO worth it! 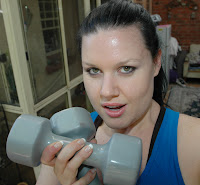 - MUSIC or MP3 player for my walks - also a necessity - can't function without them!!  I get caught up in the beats and end up walking or moving faster, simply because my mind has ceased to worry about what it is I'm actually doing, whose watching or just how long it's taking - and I just keep on moving!!

- My free weights - or my "other best friends"!!!   LOVE these babies sooooo much.  Never underestimate the power of some awesome free weights!  I've slowly progressed up from "girly" weights to these 5kilo a piece babies that like to tell me whose boss!  Recently upgraded to bars where I can add weights accordingly, but they're kicking my bum no end - so it's a slow and steady increase on the weights for a while!   Gimme guns baby!!!!

For a girl who could barely move in the beginning, I'm pretty happy with the progress of my fitness in just three years!  I get asked quite often what sort of exercise I actually do - particularly as it's been a crucial part of my progress (and people want in on ALL the secrets!!!) - but I change things up often, and have only ever done things within my ability.  There's HEAPS of room for improvement in the future, and lots of other things I'm yet to even try!   So excited by all the possibilities out there now, and love when I find something new that I just "click" with - like my Zumba classes (but I'll leave that for another blog..!!)