SO following on from yesterday's bloggy about my Word Challenge...  today's word is:


COURAGE
As I was walking around my river circuit this afternoon, my little brain was ticking over about how I was going to present this word today, and why it had become one of the chosen few...  I have a lot of valid reasons for choosing this particular word - and naturally, it flowed quite easily after 'FORGIVENESS' yesterday - you need to forgive in order to move forward, but you can't move forward unless you can summon up that first step of courage...

AHHHH yes - you see where I'm heading with this one already don't you?!!  SO many little intricate links going on here...!

SO, walking like a lunatic this arvy (as I do!) and "following my not-so-yellow-nor-brick-road", my head goes into overload thinking this one through...  I had a little flashback to the Wizard of Oz - given that the word brought up memories of the Lion and his quest for courage! The Cowardly Lion - with all his false bravado - was actually quite broken, thinking he needed a dose of 'courage' from the Wizard in order to "be the lion he was meant to be"... 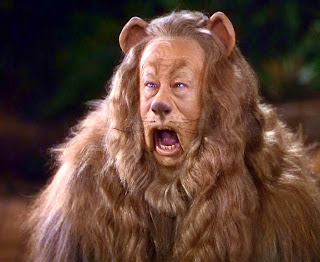 So I started to realise that I was a bit like the Lion... somewhat 'tough' and harsh on the exterior, lots of 'fluff' on the outside to hide what was actually going on underneath...

... and as mentioned in my post yesterday, the reality was actually a very different story...

NOW, getting past my character analogy here, let's get down to business...

COURAGE...  We probably link that with 'strength' and 'valour', tied in with a significant amount of 'fight' - and associate that with big things like war or heroics, where people really do go well and truly beyond the "call of duty" in the name of survival.

... but courage doesn't have to be that "formal" or "big" either.  It can pack a mighty punch in small doses and on small scales, and still have the power to impact a life in massive ways!

When I think of 'courage' in terms of weightloss, there's quite a few elements that spring to mind...

I never did think of myself as someone who was 'courageous'...  not when I was so willing to give up on my life.  I certainly didn't think I was courageous when I started my weightloss mission three years back - I expected to fail - I just assumed I didn't have what it takes (too overwhelming, too big, too incapable, didn't deserve it, etc etc) - I was still waiting to fail right up until this year!! That's NOT courageous...!

... until I realised (only recently) that I've been "fighting the good fight" on so many sub-levels, and the courage has been slowly brewing and growing for the better part of my entire weightloss mission!  Three years later, and it really is only NOW that I'm starting to see just what potential I have going on underneath this surface.... ! 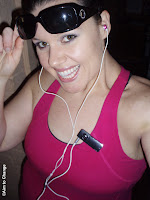 I've had so many mini-victories over the years - barriers and fears I've had to face - and have (for the most part) broken through!  A few of my stand-out moments include: (and these are just a few - there's HEAPS of small ones too!)...
... and one of my biggest moments - and the standout one for me for this blog - (the one I'm so very proud of) - going public with my weightloss.  It was a strategic move - having done this "in secret" for three years because I feared failure, feared the external expectations, and feared being shunned...   I was STILL carrying a lifetime's worth of "self hate" for my weight, and brutal shame, and irrespective of having lost over 75kilos (at the time) - I was STILL too scared to admit to the wider community (including my family) that I was right in the thick of battling a weight problem...

EVERYTHING has changed since -

That's something bigger than my usual "everyday Amy" thing going on!  That's what's been bubbling away for three years inside - like a volcano - and this year it just went OFF!   ..... and I LOVE IT!

When I picked that word out of the list yesterday, I knew it was going to conjure up quite a few emotions too... and knew it'd tap into some of the deeper sub-layers to who I am and why I'm doing this...  but I still questioned if I was "courageous"...  even going so far as pre-thinking I'd be talking about "hopefully finding the courage within"...

BUT it dawned on me today when I was strutting my stuff, that I'm not LOOKING anymore - I'M ALREADY WORKING IT!

Which is funny... cuz going back to the cowardly Lion and the whole moral of the Wizard of Oz story...   It's all about what you already have - acknowledging that these qualities are already there within us, but it's our own self-doubt that we undermine ourselves with 'illusions', let ourselves believe we're lacking, when in fact, these qualities are right there waiting for us to tap into them!

I never did lack courage.  It's one of my attributes that allowed me to change the course of my life...   COURAGE is the reason I'm still here...