Just a quick blog about my little weekend adventure - my Sydney Bridge Run (as part of the Sydney Running Festival's half and full Marathons - to which I was both insanely envious!!) - 9kms for me!   ... and without any melodramatic "life affirming epiphanies" to enlighten us with!  (this one's pure sweat and enjoyment!)

Sunday 18 September - a bit of a manic start to the day when I pre-set my alarm wrong and my sister set hers for the afternoon (hahaha... between the pair of us, we couldn't even get ONE alarm right?!!).  So 20 minutes to shower, dress and get our butts to the train station (for an hour trip) to make the start of the race, certainly brought on the adrenalin rush slightly ahead of schedule... !!! 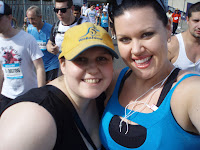 We hit Milsons Point right in the thick of the crowds - right on time really... and joined the ENORMOUS toilet queue...   What race-day fiasco would be complete without an endurance toilet stop (grrrrr.... reminiscent of City 2 Surf's 40-minute pitstop?!!!  At least this one was BEFORE the race!!)

.... still standing in the line, and it's notoriously close to kick-off time...  By the time we get in and out of the rotten cubicles, spray on the sunscreen and plug the headphones in, the crowds are already underway!   ... and off we go!

I was trying to warm up at the beginning with my sis, but she waved me on and left me to my devices!  ... the legs wanted to go, so off I went, with the flow of the crowd... and hit a run pace pretty early on!! 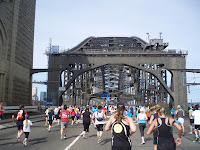 In a rush of sweaty bodies and the sound of joggers on the pavement, we veered over onto the Bridge - THAT Bridge - the one that took my breath away just a few weeks ago, when I was standing ON TOP of it - now I was directly below, running across the centre of it!   ... and RUN I did!!!

I've been interval training my jogging ever since City 2 Surf - when the knees and hips prevail.  My Bathurst Jog just last weekend was STELLAR (7.5kms in 55mins with heaps of runs)  - and this one proved equally as awesome!   The course was pretty flat, so no dreaded hills to aggravate the pace too much (though the thirty-degree heat wave that hit on the day was proving to be irritable!!!).... but I pushed on. 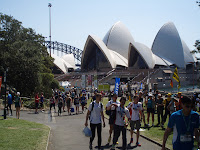 Now, I'm a pretty low-key exerciser in that I don't tend to need to take on much fluid (or if I do, it bogs me down and I feel sick...).  Well, the heat was playing havoc with me - and the sweat pouring off my face, the dry mouth and the serious hot-flash hits I was experiencing were all fluid related - so hitting those drink stations was a HUGE necessity!  ... and probably one of the only reasons I managed to haul arse through to the end without suffering for it like so many others did!  I know my body well enough to read all the signals...  which was such an eye-opener and I'm kinda proud of myself that I've learnt to 'talk' with the bod in such an awesome way!   We did great!!!

9kms later, and I'm running through the end wondering where the rest of the course is... ?!!!  I clocked in with an official time of 1:09!!!   SUPER STOKED!!!  Considering I'd pulled a 7kms just a week earlier, a Mt Panorama walk amongst all my other weekly exercise before I left for Sydney... yep, 1hour and 9minutes of AWESOME it was!!

Aside from some seriously sore hips and wonky knees (which are still slightly tender, but they pulled through my RPM class quite ok today!)...  hitting the finish at the Sydney Opera House was pretty fabulous!  Lots of freebies and water later - (not to mention me grabbing that bloody medal, no chance I was leaving without THAT!) - and I'm walking around thinking this is pretty sweet... Not bad for the girl whose only ever done a couple of these types of events before - even more so for the girl whose barely even started her running career!  (hahaha)    ... seriously HAPPY!!! 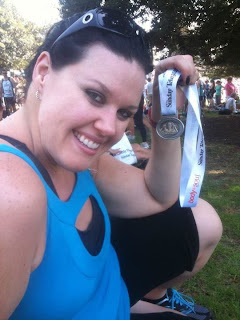 25mins later, my sis makes her way across the finish line, and is pretty much stuffed... We park on the grass in the shade for a while, and yep.. my hips call it quits for the day, haha!   She's drained and dizzy (and very much suffering from the heat - didn't pull up so well) - but we have that wretched hour train ride ahead of us yet... so off we head to the station..... right behind all the other people who look equally as hot and bothered as we do!!!    (gotta love the after effects of a super workout - everyone looked completely stuffed - a job well done by all!!)

... Though just before I headed off to Sydney, I DID get a message to say I'd won a free entry into the Melbourne 14kms City2Sea for November!  It was on the wishlist, so I guess the Universe is definitely working on this one for me... !!!    All going well, that's the next goal - more intervals and hill training in the meantime - I want more endurance, better fitness, more lower body strength and I'm pushing for a better time than my City 2 Surf...   Fingers crossed I can make this one happen!!   ;)
Posted by Aim at 5:16 PM