Indulge me for a moment, while I manifest the courage to say goodbye to the 'old body'...

In "two more workout days" I go in for my first-phase reconstructive body surgery.  That's the crazy label I've given it, because one surgery won't be enough, and my first-phase is all I can afford at the moment.

Today I've woken up with really flighty butterflies in my belly, and I'm feeling a tad sick. It was to be expected - but given I was quite smug last night, thinking I'd spent bulk of the week "uncharacteristically calm" - I realise now it was just the calm before the storm!

Last Monday was horrible - I think I'd over-dramatised the "one week from today" factor in my head, and woke up feeling like a giant was sitting on my chest, I could barely breathe...   Spent the rest of the week calm, collected, and then the excitement set in - I was just SO excited.

When I went to order my Bank Cheque to pay the surgeon on Wednesday, I took one enormous gulp and ran through the doors to have the teller draw the funds.  One of the staff saw me standing there waiting - she was the lady I'd dealt with when taking out a loan to buy my car - and when I explained I'd found one cheaper than my budget, it meant I could use the balance for my surgery (instead of eating into my surgery savings) and that it was happening on Monday - it really struck me what I was about to do.  I sat down at my desk on my return sweating like crazy but SO excited and happy!  I went to take a huge-grin selfie photo - and then lost it entirely, and sat there in tears instead! 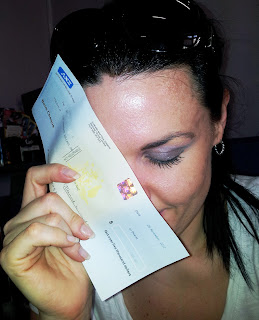 The next day, I head off to the clinic to pre-pay the surgeon - and get the thumbs up all was scheduled and ready to go.  The phone call from the hospital to confirm, and my time to come in, what to wear, what to bring, what to eat....  oh my gosh, my head was spinning.


If you'd have asked me a few months ago how I was feeling about my body, my answer would have been less than diplomatic.  You only have to read my FB posts or blog to know this year has been less than "spectacular", and how disappointed and let down I feel after so much disciplined work.

I got jack of all the headgames and heartache that just seemed to be pulling me backwards... and if you know me, know my words - you'll know that backwards is NOT the direction I go.  It's "ALWAYS FORWARD" - always.

When the surgeon pulled out the forms a few months ago - nearly exactly a year after our first consultation - because I was beside myself with hatred, upset and "I just don't know what else to do!".... the mixed emotions that came with that "reprieve" were about to give me one hell of a run for my money.

The last few months I've been focused beyond belief - more than ever before.  I had a goal - a big one - and I simply wasn't willing to mess it up! It was the opportunity to make this right - to give myself a fighting chance against the 'backwards' and make sure I kept building on all the beautiful things that have been transforming over the last few years.

I simply wasn't about to let this skin I'm in destroy me.  No way.


I HATE that it's come to this - and here comes the conflicting headspace that I've been fighting the last few months!!   What hurts me is that I see no valid reason to cut a perfectly healthy body to pieces - I have trained SO hard the past three months, eaten so well, nurtured my body - and I have the changes to show it! (albeit under skin that I can't physically see... !!!!  Argh!).    ... but when I stand in front of the mirror and have to SEE what this body looks like after all that stellar effort, it hurts.  It stings.  I look like people's "before photo" - not someone whose literally halved herself in a quest to completely change the direction of her life.  GIVE herself a life.

I've had people say to me "you're so lucky" and "I wish it was me!" - and whilst there's no malice or negativity behind the comments - I guess for me, the bigger picture (the 25+ years of fighting obesity, self-hatred, self-destruction) - I wouldn't wish this on my worst enemy!  My first-phase reconstructive surgery won't FIX all my issues - it certainly won't take them away or erase them out of my heart...   It's just superficial - an extreme way of trying to create future potential and possibilities that are still eluding me.  It's certainly no "means to an end"  - and it's not the "reward" I'd once thought it'd be when I'd hit my goal ("goal" .... even that word makes me cringe these days...!)

No, this whole thing has become something different to me.  There's an element of FREEDOM that comes with this one - and just acknowleding this at the moment is making me upset....  This afternoon I go for my final Pump gym class - and already the prospect of doing my final pushups with bellyskin hovering just a couple inches off the floor has me in tears.   (#Argh!  I'm SO gonna cry at the gym this arvy.... haha!).   The prospect of being able to wear a pair of pants that actually FIT - I've never been able to wear pants! (I HATE stretch pants, they do nothing for my roundness!!!)   The thought that when I sit down, I don't have to pull my bellyskin into a comfortable position....  Being able to do a starjump and not have the after-shock of follow-through skin to embarass me.  Possibly not having to worry about the under-belly sweat running down my legs on a really hot day, and trying - ashamedly - to hide it (the heatwave that's just hit was a cruel reminder of that one).    Maybe, someday, being able to look at myself in the mirror and actually being able to like what I see. (I'll put a TBC on that - that's a huge one, I don't have an end date on that, if ever).

In taking stock of what's happened in the past - what's happened during my changes - and what's about to happen... it hit me last night, the 'fear' that I hadn't actually acknowledged....  It just took a while to come to the surface.

The surgery doesn't scare me - bring on the scalpels I say (minor eep!).  The prospect of "what happens after" is still swirling in my head - the fears of what I don't know or how to be this person in a body this size that I've never been privy to...  it's still scary, but not paralysing.  I even came to a calming conclusion that I was actually somewhat OK with those things!!

No, it was the "saying goodbye" to the skin thing.  I'm an extremely sentimental girl - probably somewhat freakishly (haha) - I take a great deal of meaning in little things - moments in time - the whole works.  I find it incredibly hard to part with 'things' that mean something to me - and I guess the skin is no different. God, it's been attached to me for 33 years for crying out loud - it's not something I'd just "discard" without at least a few tears, right?!!

But I think it goes beyond the heart-strings here...   My skin has protected me - it's shielded me.  Through all the yucky times, and the redevelopment process - it's looked after me.  It's the 'armour' - it's kept me safe.  While the girl inside has been changing - learning - getting more confident and brave enough to stand up and be seen - my skin has been shielding me, covering me, giving me the time to change.

What happens when you take away your 'security blanket'?    I'm really disappointed in myself that it's taken me this long to recognise this - that it isn't my SKIN that's made me hate myself here...  It was an easy excuse, and easy out - far easier to blame what I can SEE than acknowledge that inside, there's this fragility and fear I'm still working through.

My SKIN is what's kept me honest and accountable this year - it's the reason I pulled rank on my shitty eating habits and the 'it's all too hard!' mentality and put on 8 kgs over winter - when I had my breakdown and was forced to reevaluate who I am NOW (versus who I was in the past).  My SKIN bore brunt of the blame for the backwards self-hatred spiral - and yet it was the REASON I pushed through and fought harder, to turn it around.   I always thought it was a horrible reminder of all the bad times, the negativity and the disappointment - but I think I was very wrong.... 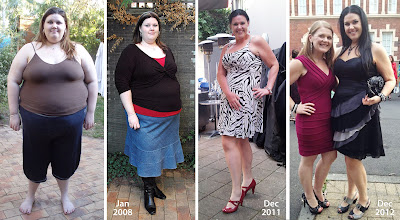 I'm HUMBLED by the skin I'm in - we may not see eye to eye sometimes, but it's been my godsend after all. Saying goodbye to that is incredibly hard - and not for the reasons I'd assumed for so long.  This has been a LONG TIME COMING - and starring down the barrel of what's about to happen in just two days....  far out, I knew the tears were coming... but I certainly didn't see this little revelation coming!!

So, what do you do when you're about to say goodbye?!  Where does it go when they cut it off?  Does it just go in the bin?!!   Do I have to have a funeral for my skin?!  How do I pay my respects to a part of me that's been so pivotal in turning my life around?!

Maybe I need to ponder that some more...   I have two whole days to do that.

Email ThisBlogThis!Share to TwitterShare to FacebookShare to Pinterest
Labels: self acceptance, surgery